The Evil Sheriff off road duathlon (Run 5K / Bike 20K / Run 3.6K) was the second out of three events in the Midlands Off Road Duathlon Series and, like last year, it well and truly lived up to its name with foul weather mentally defeating many competitors before the event even started. Mick W was the Go Veggie in action and thanks to an absolutely storming bike leg – during the course of which, thanks to the filthy-grinding-paste conditions, a full set of brake pads were destroyed – Mick improved on his best-yet overall position in this series and finished 23/229 taking an age group 4th place to boot.

On the back of the duathlon events, the organisers also promote a very popular 10K trail race series. This particular round featured the Robin Hood 10K and a returning-from-injury Rosie Wigg on the start line. Though nervous because of a lack of training and competition, Rose nevertheless put in a good solid performance taking a 27/151 in age category and a top-third-of-the-field overall finish.

The last in the series of both races follows soon and will see both in action again; hopefully with slightly better weather – this round looked truly awful. 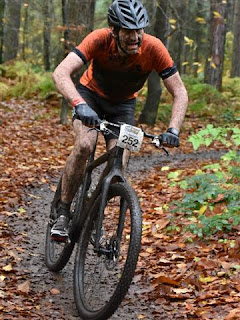