The Beaver Middle Distance triathlon - held annually at Belvoir Castle, Leicestershire - is not for the squeamish. For a start there's the sheer distances; a 1.9 kilometre swim followed by a 74 kilometre bike, and then a 20 kilometre run to really drive home the punishment.

Then there's the terrain. The swim for this event is in a really shallow and very silty lake that often leaves competitors with zero vision and a very muddy after-taste. Compounding the silt-fest, the exit from the swim does not - as is usually the case - directly access T1. Instead, participants have at least a 500 metre wetsuit-flapping uphill run - on grass by the way - before taking to the bike. The bike leg itself is a tough multi-lap affair with some technical sections and the small matter of a 2 mile long hill, and - for anyone still able to stand - there remains the run. At 20K it would be hard enough if it were road based and pan flat, but of course, it isn't!

In spite of the course - and intentionally keeping out of the frenetic 'bun fight' that is triathlon open water swimming for fear of having his pacemaker accidentally kicked - Jon Z not only completed the grueller, but rattled it off in 6:00:32: good enough for a 2nd in age group finish (pic).

Jon continues to confound fellow athletes and anyone else with a sense of just how tough this kind of stuff is by not only continuing to compete in events like this so soon after major heart surgery, but doing it in some style. 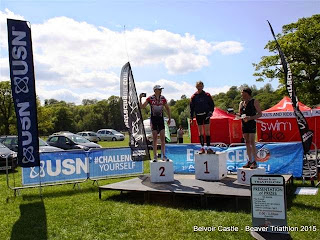