Congratulations to Rosie W who, following a very well paced effort at the Thirsk 10, continued to demonstrate perfect pacing prowess in the Ackworth Road Runners half marathon event held last Sunday (12th April). The course for this event is hilly to say the least and a strong wind on the day made the going anything but fast. In spite of this, Rose kept a very cool head and held back her efforts knowing that fatigue - especially given the going - would bite hard and dramatically slow fellow competitors down. The reward was a PB for the distance of 1:55 plus change; a full quarter of an hour better than her previous 13.1 mile best. Therein lies a lesson.

A few days after the event the Gods of running reminded Rose that some days are good, and some not so. A spill whilst out training saw our latest PB maker needing a little TLC (pic). Ouch! 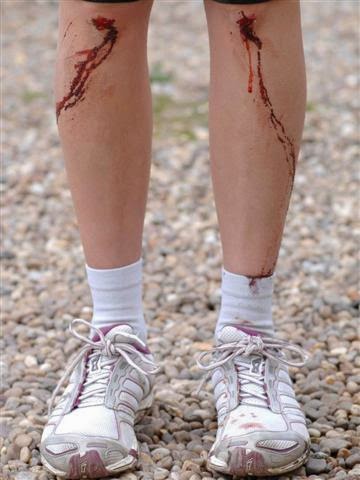 In other news, many members have kept up with parkrunning this past two weekends but perhaps the event of note was one undertaken by Emma S and Steve W whilst on holiday touring Ireland.

Bere Island is a small island that lies off the already remote Beara Peninsula in the deepest south west of the country. In order to participate, unless you live on Bere Island, competitors have to take an early Saturday morning ferry from the mainland and then get to the start point which is 8K away from the ferry port. Emma tried to work out the logistics but couldn't get much in the way of straight answers so our intrepid GV duo - having little idea what might happen - just took a blind leap of faith and made a bleary eyed appearance at the ferry pick up point in their tried and trusted race shoes.

Emma takes up the story:

"It was quite exciting as the Bere Island ferry pulled in and about 30 runners, who had been quietly arriving on the quay, made their way aboard. The trip to the island only took about 10 minutes and on our arrival we were suspiciously met by a couple of very dilapidated vans - an old VW transporter, and an even older Transit. The Transit had only half of its exhaust system left, the rear light clusters had been smashed out, and every single panel was bashed in. It slowly dawned that this was to be our 'bus' to the start.

The mystery of the 'critical link' bus driver was also solved when our ferry pilot, complete with running shoes, casually - and with a wry humour - uncomfortably crammed each and every runner, a baby buggy; and two dogs into both of the vans and then hopped into the VW and set off up a twisting, steep and incredibly narrow road. Death seemed a certainty.

On the upside, as it turned out, our 'bus' - by Bere Island standards - was in pretty good shape. Not one car we saw had an intact set of panels or lights. Full exhausts seemed optional, and it seems it's compulsory to stop and chat through opened drivers' window to every vehicle that is met driving in the opposite direction as chunks of vegetation are casually gathered by any protruding nearside bodywork.

Incredibly, after about 10 minutes of sinuous hairpins we arrived at the parkrun start - and what a surprise we had. Waiting for us were about 60 of the Island's inhabitants at an immaculately maintained multi-use sports pitch, complete with full changing facilities, toilets and showers. The islanders are only about 200 in total number, but boy have they  embraced the parkrun. All human life was here - and participating; from old blokes, through ladies in printed dresses, right down to about a dozen youngsters. Amongst the number were, of course, some pretty serious runners, but this event was clearly more about community than athletic prowess.

Nonetheless, at the get-go competition was fierce. The course itself offered beautiful vistas, running on a decaying single-track  road around a rugged Atlantic-dominated headland up and down some pretty fearsome hills. It was tough, but superbly rewarding. It was also hot. By the time the starter had said 'go' at 9.46am (bearing in mind all parkruns the world over start at 9.00am sharp), it was something like 18°C.
Post run, the esoteric nature of the thing continued and all 'mainland' runners were urged to Murphy's cafe / post office / general store / wickerman manufacturers for tea, coffee and cake. No one took any persuading and all sat about amongst the incongruous palm trees eating, drinking, and chatting until the 'busses' reappeared to begin the journey back to the ferry and then mainland.

The whole experience was slightly surreal but highly enjoyable. The parkrun phenomenon has gripped the island and must be responsible for 90% of its GDP in the simple form of ferry fares and Murphy's cake consumption.

Sounds like a very worthwhile experience and well worth the effort!
Posted on: Friday, April 17, 2015