Mick W was in cross duathlon action again on Saturday (29th November) in the 3rd and final event of the popular and very well organised Midland Off Road Race Series.

Sunday's round was based at the National Water Sports Centre near Nottingham - water being the relevant word. The signs were ominous when the organisers contacted every competitor the night before the race advising them to allow extra time to arrive as the venue car park was flooded!

Sure enough, the 5K run, 16K bike, and final 2.5K run were all a squelch-fest resembling archetypal Glastonbury scenes; but with no stages, only a few tents, and much less pretentiousness. Mick's choice of running footwear was not the best and a comedy-slither round the first 5K saw him needing to put in a top-drawer bike performance to salvage some places. Fortunately he was up to it and his MTB background saw him absolutely blast the leg to take on the 2nd of the runs well up the overall field.

Proving those long endurance training efforts are actually worth it, Mick held on in the run for a splendid 2nd in age group and 23rd overall position.

A major bonus was that his consistency in the three counting events saw him as series winner in his age group. 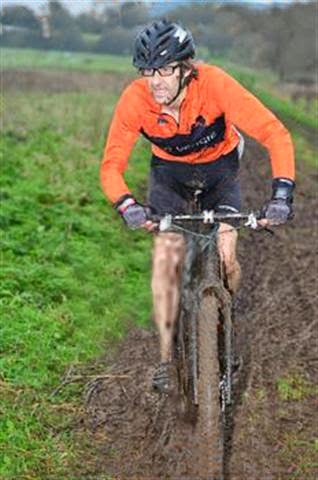