Sunday 27th saw Steve W and Emma S on the start line of the Dave Lloyd Lincoln Sprint Triathlon (Swim 400m / Bike 22K  / Run 5K). This is a well organised and popular event with something like 600 competitors throwing their hat in the ring this year.

The bike course for this race has a notorious hill at about the two mile mark where the traditionally flat(ish) Lincolnshire countryside - undoubtedly for perfectly explicable geological reasons - suddenly changes levels. The hill is only short but it is brutal. It really is bottom-gear-and-grind stuff and it is common to see people off and pushing (funny in cleated bike shoes), or quite literally falling over sideways whilst still attached to the bike.

Both Go Veggies knew what to expect though (see Emma's bike choice) and survived the encounter unscathed, apart - that is - from the general sensation that that kind of thing can't be good for you.

Though complaining (again) of not feeling so good, Steve won his age group and was 15th overall whilst Emma - who paced the event really competently - just sneaked into the top 10 in her age group and only just missed out on a top-half-of-the-entire field placing (including all male competitors). 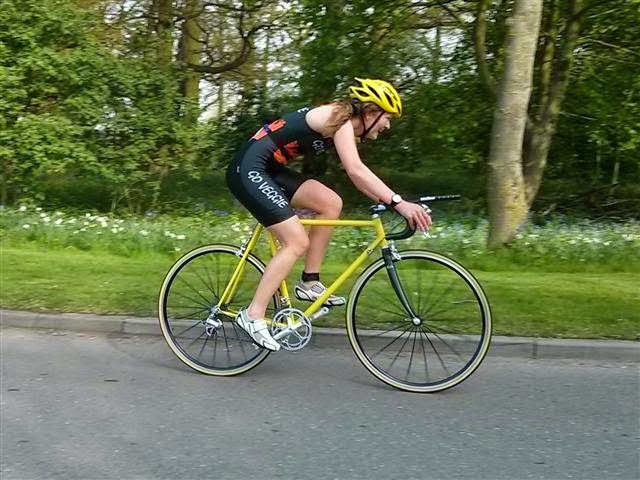